The first ‘official’ use of rifles fitted with telescopic sights for combat purposes by the American Military dates back to Civil War times. These early ‘sniper rifles’ were generally bench-rest target rifles which were fitted with the somewhat crude telescopic sights of the day. These rifles were basically privately purchased rifles – no attempt was made to develop a standard sniping rifle and after the war between the states ended in 1865 the U.S. Military abandoned the idea of a telescopic-sighted sniper rifle.

After the 30.40 Krag rifle was adopted in 1892 there was some developmental work done which teamed the Krag rifle with a telescope made by the Cataract Tool & Optical Company. However, these tests were shelved when the Krag was found lacking when pitted against the superb Mauser in the war between United States and Spain.

The search for a new service rifle had begun which resulted in the Mauser based designed Springfield 1903. This rifle remained the standard service arm of the United States for 40 years and was in service as a sniper rifle for over 60 years.

Despite modifications to the 1903 rifle (including a change of calibre) it was proposed that telescopic sighted rifles be available to selected marksmen. An experimental rifle telescope, designed by Ambrose Swasey, a co-founder of the Cleveland, Ohio firm of Warner & Swasey was selected.

It was an unusual prismatic construction which had the advantage of allowing a wide field of view at the relatively high magnification of 6x. The Model 1908 Warner & Swasey sight was constructed of black painted brass and steel and weighed a hefty 2 ¼ pounds. Warner & Swasey company markings and the serial number of the sight were stamped on the left side of the scope body and two brass plates were fastened to the top of the sight which contained firing and adjustment data.

The scope had a cross hair reticle and three stadia lines for estimating distances.  a dovetail base was fastened by three screws to the left side of a standard Springfield M1903 service rifle.  The telescopic sight had a corresponding dovetail mount.  A spring-loaded plunger held the mount to the base in one of two positions or allowed the scope to be quickly and easily removed from the rifle.  The telescope was offset to the left side of the receiver so that the ‘03 could be clip-loaded and fired normally.  This location also allowed the standard iron sights to be used with the scope in place. 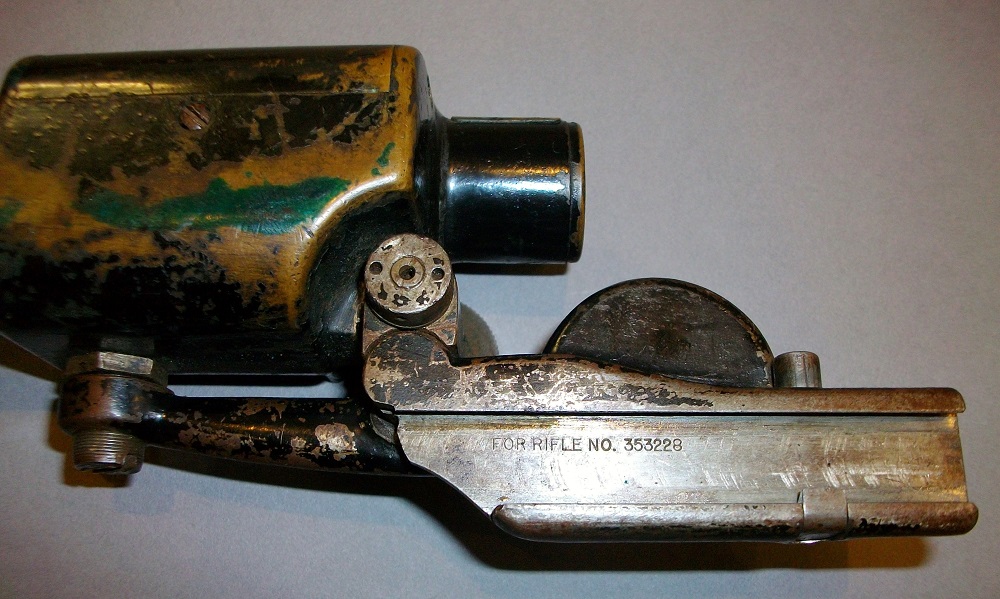 The serial number of the ‘03 rifle to which a particular M1908 W&S sight was mated was stamped inside of the sights dovetail recess. Regulations called for matched rifles and sights to be kept together at all times but, in actual practice, the rifles and sights were soon mixed up and non-matching numbers are the norm for most surviving examples. 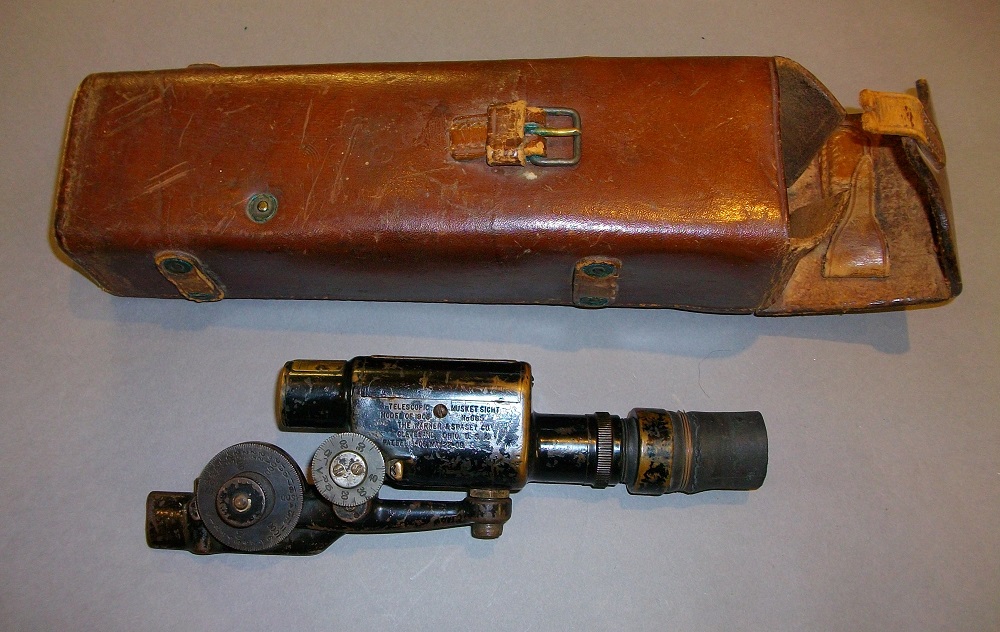 The W&S sights were fitted with a rubber eyepiece and issued with a leather carrying case (with shoulder strap and cartridge belt hooks).  The leather cases were used to carry and protect the telescopic sights when they were removed from the rifle.  The adjustment wrench for the M1908 scope was carried in a pocket inside of the case cover flap.  All M1908 leather carrying cases are believed to have been manufactured by Rock Island Arsenal.

For most of the soldiers who were issued the W&S sighted ‘03 rifles the telescopic sight was something of a novelty.  However, the sight had some serious design problems which soon become apparent.  The prisms could easily be knocked out of alignment and the scope was plagued by moisture clouding the internal optics.  To further compound the problem, any small foreign particle (namely the black enamel paint on the inside of the scope body would flake off in small pieces under recoil) and would be magnified 6x in the sight picture  –  a speck the size of a grain of sand would look very much like a brick!  The heavy scope mounted on the left of the receiver tended to make the rifle somewhat unwieldy and unbalanced and the short eye-relief (about 1 ½ inches) required by the prismatic design of the scope necessitated the use of a rubber eyepiece to properly position and cushion the shooters eye.  When the rifle was fired the recoil would shove the eyepiece back into the eye socket and the resulting vacuum would cause it to stick to the soldiers face.  This problem was easily solved by putting several holes in the eyepiece to relieve the vacuum effect.
The problems encountered with the M1908 sight eventually resulted in the development of a modified design which was intended to improve the situation  –  The Model of 1913 Warner & Swasey Musket sight. 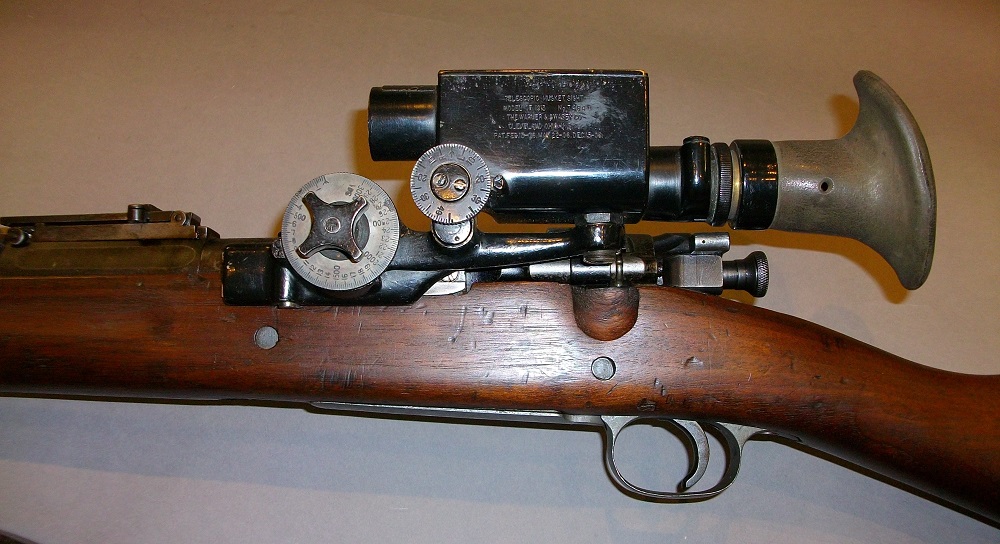 The M1913 had a slightly different external profile than the M1908, a cruciform shaped elevation dial locking nut instead of the round locking nut and a screw to secure the eyepiece adjustment. The power was reduced to 5.2x in order to improve its light-gathering characteristics, producing a brighter sight picture. Most production M1908 sights had the holes in the rubber eyepiece to alleviate the suction problem and this feature was retained on the later M1913 W&S sights. The method of mounting the M1913 sight on the rifle was the same as for the M1908 sight and it used the same type of dovetail receiver bracket. 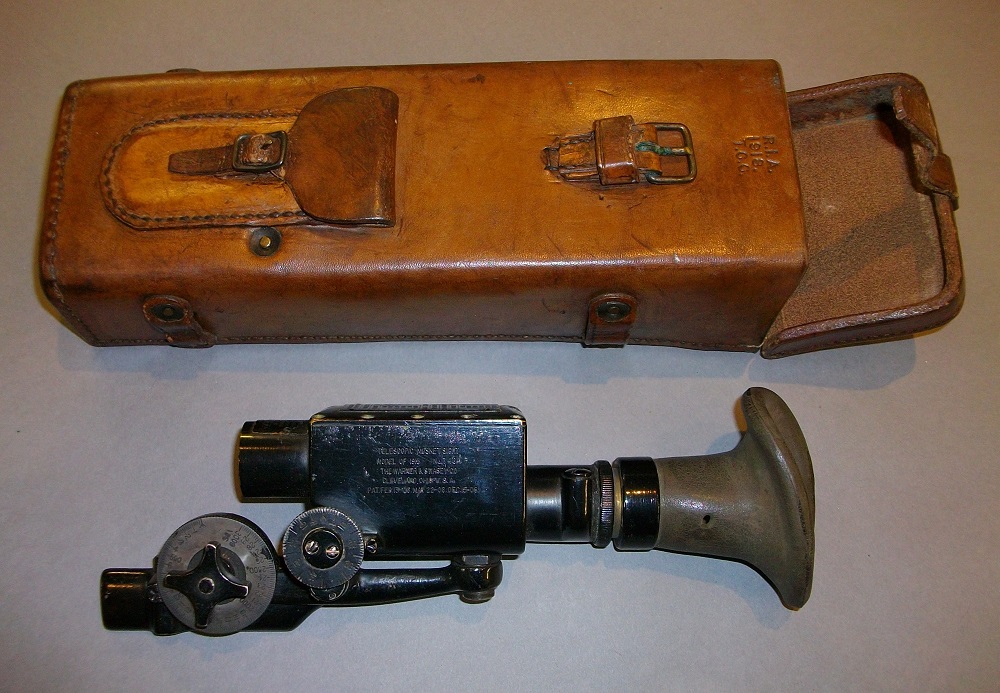 The M1913 sight was issued with a leather carrying case similar to the previous model along with a simplified stamped sheet metal adjustment wrench carried in a pocket on the outside of the case body.  Rock Island Arsenal and the Diamond D Company made the leather cases.  The improvements on the M1913 were, in reality, more perceived than real.
The two sights were basically identical and shared the same inherent design flaws and resultant problems. 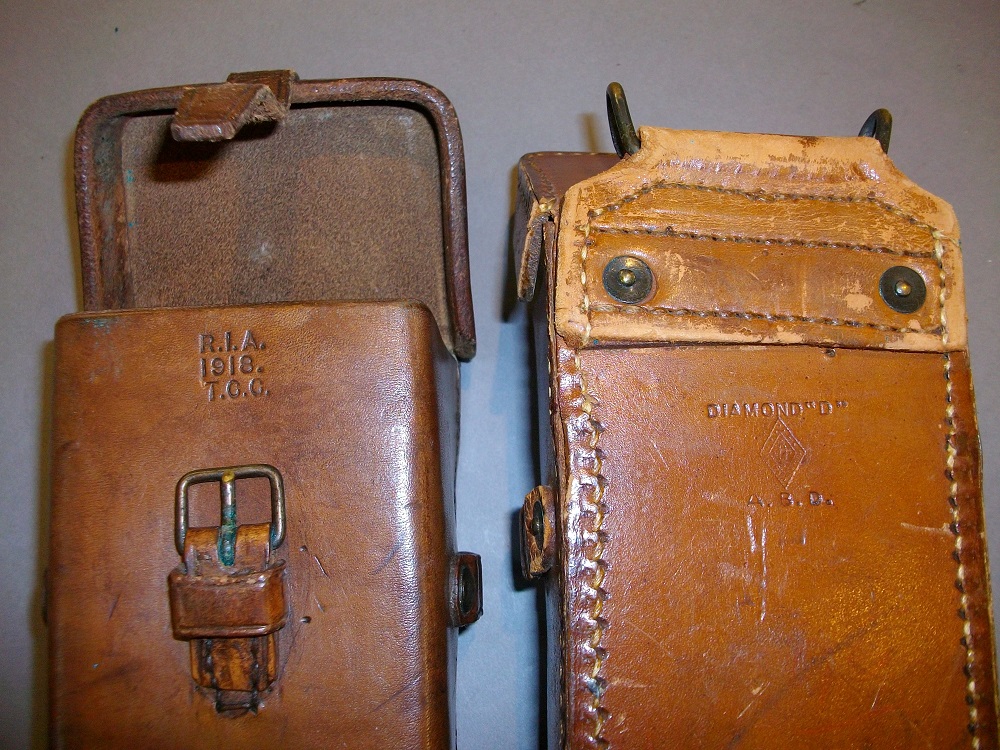 The two manufacturers of the M1913 leather case

The US Government eventually purchased 5,730 M1913 scopes, 4,200 of this number were delivered at the end of the war and were never mounted on the rifles or issued, therefore, even though many more M1913 than M1908 sights were produced, it is generally assumed only 1,530 were officially mounted on ‘03 rifles and issued by the Army. The surplus M 1913 scopes were sold off in the 1920’s and 1930’s. Only Springfield ‘03 rifles were fitted with W&S sights, none were fitted to Rock Island Arsenal ‘03 rifles.

The first combat use of the ‘03 rifles fitted with W&S sights, primarily the M1908 variant, was during the Mexican Punitive Expedition in 1916 – some of the rifles were also equipped with Maxim silencers – a suppressed sniper rifle ….. very much a first!

The Springfield ‘03 fitted with M1913 W&S musket sights was the standard US Army sniping rifle of the First World War.

Two or three common problems with the W&S sights when used in combat resulted in field maintenance alterations to remedy or help ‘fix’ them. One was interference of the rubber eyepiece with a soldier’s helmet and/or damage to the fragile eyepiece which resulted in the eyepiece either being removed or cut down. A number of WWI – vintage combat photo’s reflect M1903 W&S sniper rifles in front-line use with altered or removed rubber eyepieces.

Another problem was a less-than-secure attachment of the W&S sight to the receiver’s telescope bracket. While some soldiers fashioned shims from razor blades, wedging the shims between the sight and the bracket and rusting them in place which proved rather effective but the preferred modification to alleviate this problem was the addition of one or two screws that could be tightened to better secure the W&S sight to the bracket and still allowed its removal.

The receivers telescope bracket itself also worked loose and the addition of one or two screws (often at an angle into the threads of one of the existing bracket screw fixings in the receiver effectively locking it and preventing it from working loose) was another field expedient.

The M1903 Warner & Swasey Sniper Rifles saw widespread issue in WWI and a number saw front-line combat and performed well considering the limitations of the sight. 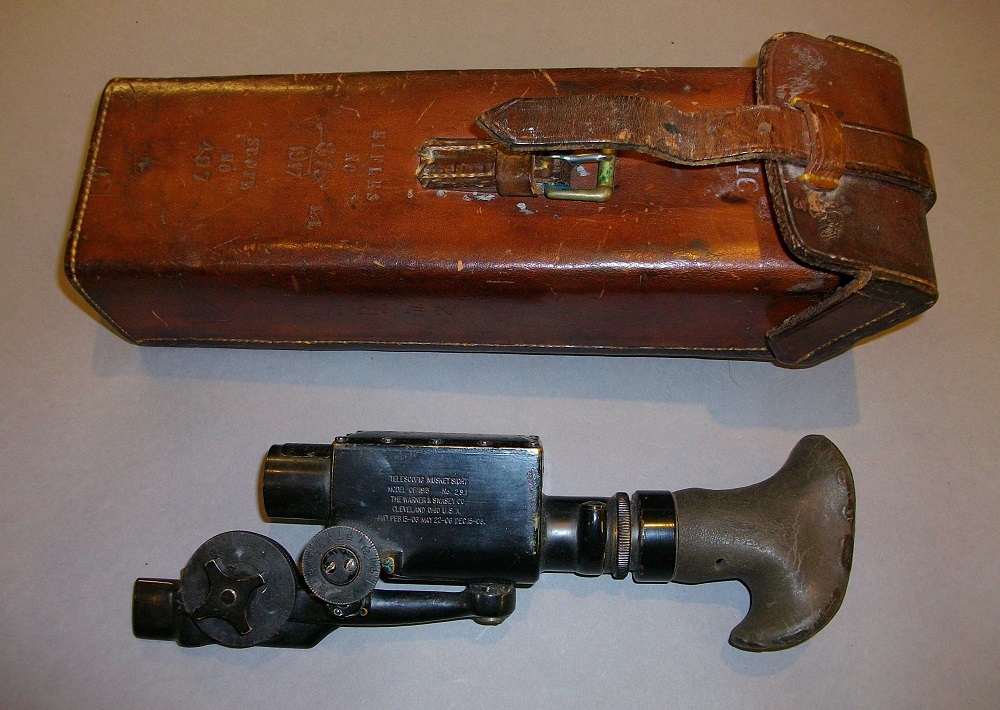 The M1913 W&S sights also saw use with Canadian forces in WWI.  A total of 500 W&S sights were adapted and fixed to the Ross rifle, chambered for ‘303.  The Canadian snipers held them in high regard, their exploits are detailed in the book ‘A Rifleman went to War’ by H W McBride.  Indeed, the soldiers who wear the Maple Leaf, took their W&S sights with them to another conflict 20 years later  –  and used them to a limited extent in WWII mounted on P14’s.

The Warner & Swasey ‘03 Sniper Rifles were withdrawn from service in the mid-1920’s.

Complete Springfield ‘03 rifles and Warner & Swasey scopes are around but most, if not all, will be ‘made up’.  Original matched rifles and scopes are extremely rare and if they come up for sale are well out of the reach of the many and remain the reserve of the well-healed and museums…. America’s first sniper commands a premium price. However, the scopes are affordable.  The unissued M1913 W&S scopes are rare but not that rare and occasionally turn up for sale in auctions but ‘normally in the States’.  The issued M1908 & M1913 W&S scopes are very rare and as a result of being issued and usually being used in combat (and 100 years old!) are not in the same condition as the unissued M1913’s. 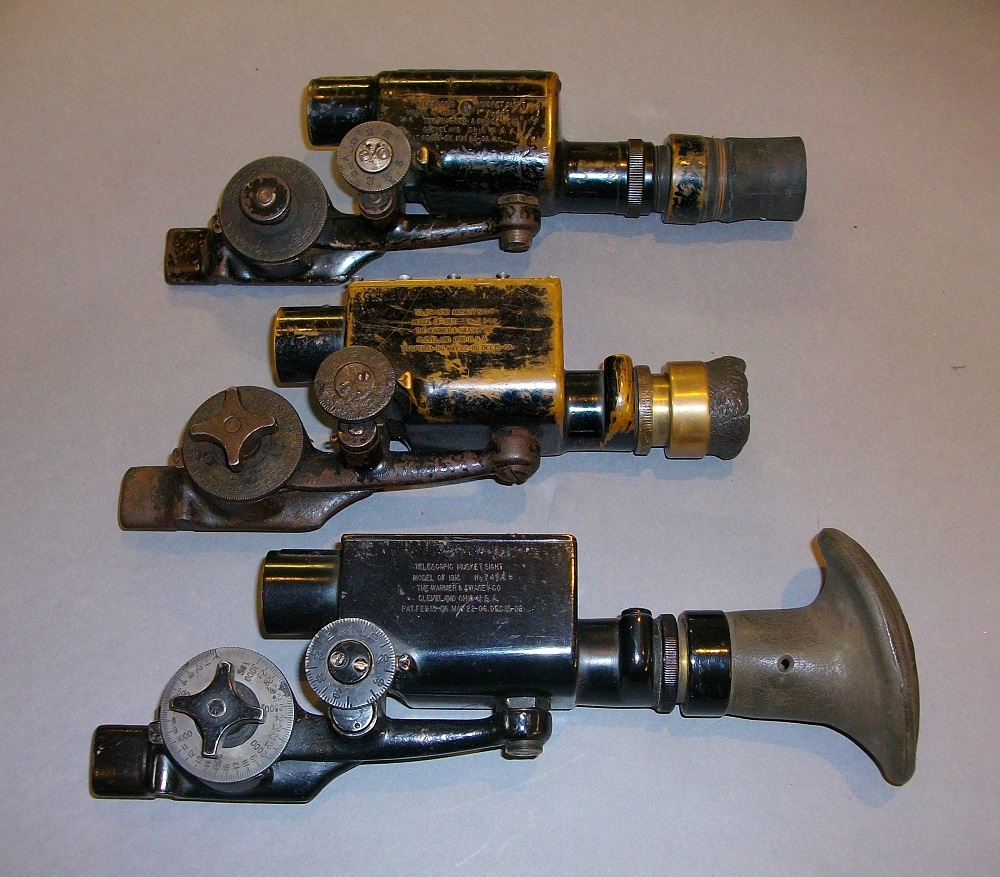 From a collecting point of view you want both.  You need an ‘as new’ M1913 with intact rubber eyecup to appreciate what a well-made and indeed magnificently over engineered rifle scope the W&S is.  Then you want the issued scope –  with the ‘all important’ serial number in the dovetail, more commonly found cut-down rubber eyecup – complete with scratches and blemishes (to wonder ‘if only they could talk’ and ‘what tales they could tell !!’).