With the exception of the Colt M1911 .45 pistol, no small arm in American history has had a longer tenure of service than the M1903 rifle.

The weapon became immediately popular with the troops using it.  The ‘03 was a trim and compact weapon and pre-WWII models displayed a magnificent level of craftsmanship.  The quality of the blued finish and the superb wood to metal fit found on early ‘03’s would be the envy of almost any sporting rifle owner today. In order to gain an understanding for the events leading up to the design and development of  the M1903 rifle, it is necessary to go back to 1892 when the United States Army adopted its first smokeless powder, small calibre repeating bolt action rifle, the “30-40” Krag. 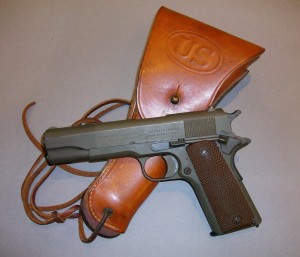 However, in the ‘Splendid Little War’ between the United States and Spain in 1898, the Krag was found lacking when pitted against the Mauser’s used by the Spanish forces.  The Mauser had numerous advantages over the Krag, including a more powerful and flatter shooting cartridge made possible by the Mauser’s strong two-lug bolt and rapid clip loading capability.  Although some experimentation was done with adapting the Krag’s side magazine to clip loading, the problem with the single locking lug bolt remained.  it was soon determined that not much could be done to improve the Krag and by 1900 the Springfield Armoury had begun to fabricate a new test rifle based on the Mauser design for evaluation. Over the next 3 years the rifle was evaluated and went through numerous design changes including shortening the barrel from 30” to 24” so the same weapon could be used by both the infantry and the cavalry. The ‘United States Magazine Rifle, Model of 1903, Calibre .30” was officially approved for adoption on June 19th 1903.  Production began immediately.  By June 1904 Springfield Armoury had made 30,000 and work was beginning in Rock Island Arsenal. The new rifle was fitted with a sliding rod bayonet instead of the Krag’s detachable Knife bayonet and chambered for a .30 calibre, rimless cartridge which featured a round-nosed 220 grain bullet and smokeless powder.  The round had a velocity of 2400 feet per second in the Springfield’s 24” barrel which was impressive performance compared to the 30-40 Krag. Production was halted in early 1905, when President Roosevelt himself proved the rod bayonet came second best when pitted against the knife bayonet.  The Ordnance Department began to look for a suitable bayonet and method of attachment to the ‘03 rifle.  Several bayonet designs were evaluated and it was decided to adopt a knife bayonet similar to that used with the Krag.  It was determined that the bayonet used with the ‘03 should have a 16” blade rather than the 12” Krag blade to compensate for the ‘03’s shorter barrel. 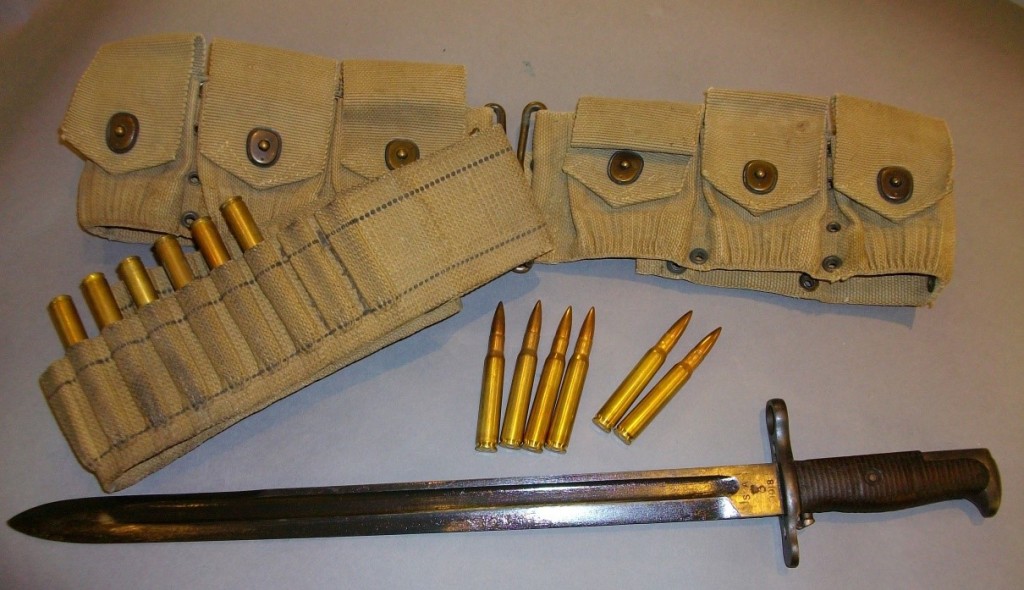 The new bayonet was approved on April 2nd 1905 as the ‘Bayonet, Model of 1905’. The rod bayonet rifles that had been issued were recalled to the Springfield Armoury and were converted to take the new type of front barrel band with bayonet lug and the rear ramp-type sight were replaced with an improved folding leaf. Soon after the manufacture of the M1903 rifle with 1905 alterations got underway, there was still another change which caused production to cease once again.  The Ordnance Department was closely watching the progress being made by the German-developed sharp pointed spitzer bullet.  After the necessary development work and subsequent testing, a new cartridge was adopted on October 15th 1906 as the ‘Cartridge, Ball, Calibre .30, Model of 1906’.  The new cartridge had superb ballistic performance and has subsequently become probably the most famous of all American rifle cartridges  –  the ‘Thirty Aught Six’  The M1906 cartridge required a chamber .200” shorter than that of the M1903 rifle so the M1903/05 rifles which had been completed were recalled and their barrels altered accordingly.  Muzzle velocity rose to 2,700ft/sec, allowing the backsight leaves to be altered to 2,850yd and a solid tubular backsight mount replaced the original skeletal pattern.

In 1910 a flute was cut in the top surface of the hand-guard to improve the sight line.  The diameter of the drift-adjuster on the back sight was increased and a recoil bolt was added through the stock above the front of the trigger-guard.  The butt plate was chequered and retaining clips were added in the hand-guard.

Close view of the left hand side of the ’03 receiver

Sufficient rifles had been made by the beginning of November 1913 to allow work to cease in Rock Island Arsenal until February 1917.  When the USA entered WWI, a parkerized finish was adopted to replace traditional browning and a second recoil bolt – through the stock, beneath the chamber – was added in 1918 when the bolt handle was bent slightly backwards.  Soon, however, there were reports of serious receiver fractures that culminated in some guns being blown apart.  The cause of those fractures was eventually traced to poor heat treatment and the problem cured by improved manufacturing techniques.  The first ‘double-treated’ Springfield guns appeared sometime prior to receiver No. 800,000 made on 20th February 1918.  (So  –  beware  –  Springfield rifles with a serial number below 800,000 should be viewed as a collector only – not as a shooter!)

Top view of the ‘03 receiver and rear ladder sight

The last rifle to be assembled in Rock Island Armoury left the factory in June 1918.  Military production in Springfield Armoury had virtually ceased by 1927.  Estimates of output vary but it is believed that about two million M1903 rifles were made. I am a fan of the ’03 and the 30-06 cartridge. The rifle is well balanced and comes to shoulder like a shotgun. It is well made, accurate, reliable and extremely pleasing to the eye (like many of the early 20th century rifles when the combination of blued steel and quality wood was the norm). No wonder the men that carried them held them in high regard. Again, many of today’s examples have been through two world conflicts and may have been arsenal refurbished several times so condition varies vastly.