As a committed shooter of both fullbore and of .22 target rifle whilst I would’nt call myself an accuracy nut I do take a keen interest. For some years barrel tuners have been about mainly in the States and in Europe as they shoot bench rest rifles far more than us.

It’s interesting to read some of the articles in the on line forums about accuracy, time and again tuners pop into the chat but not for .22 target shooting and it struck me that we seemed to be missing a trick. It was with some surprise then that looking on Donald’s Endinkillie site I found the Centra ‘Starik’ Tuner specifically made to suit .22 target rifles, Anschutz and the like. I couldn’t resist, I had to have one and so duly placed my order.

As each is specifically made to a close tolerance to fit your barrel you have to measure the barrel with a micrometer. It took just over a month for it to arrive partially held up by the severe snow storms the country was experiencing. Opening the packaging revealed the tube a couple of spanners and a second set of weights but no instructions.

Fitting wasn’t a problem it was quite straight forward, slip on the location ring slide on the tube until it hits home on the muzzle hand tighten its locking collar after first checking that the sight rail lines up as closely as possible with the rifles rail. Then slide the location ring forward so that the gap in the base fits over the protruding lug on the underside of the tuner once tightened it will ensure that each time you fit the tube it will locate to the same position.

In practice this works well, zero at 50M is maintained. As I had never previously used a tube let alone a tuner with its extra weight I thought it best to fit the lighter set of weights just to get used to it and make any fine adjustments to maintain my ‘balance’ in the shooting position. Immediately obvious was the need for a larger foresight, I took the opportunity to step up to a 22mm set which gives a better overall sight picture.

Over the following weeks I used the tube and got used to handling my extended rifle then switched to the heavier weights. With no instructions to help as a guide I found by a little trial and error what I considered to be a good position for the weights, certainly my group sizes had consistently diminished. But small group sizes could be down to other factors the improved sight base or the damping effect of having a weight stuck on the front of the barrel perhaps, or even a trick of the mind, inner self persuading me its better.

Eventually my inbuilt curiosity prevailed, I just had to find out, but how, I needed to remove the human factor, the only way I knew for certain how to do that was to use the test facility at Eley something I have done in recent years ‘batch testing’.

So I gave Martin Buttery at Eley a call and explained what I would like to do, I felt a little cheeky in asking as I had no intention of doing a batch test or buying any ammunition but without hesitation Martin said yes and gave me a date.

During the intervening time to the due date I gave some thought as to how I would test the Tuner, I would use my own batch tested Tenex, for the tuner to be of any value it had to bring group sizes down and improve on just the barrel. As the main weight carrier can be moved in 10mm increments I decided to position the weighs fully back shoot a 10 shot group then wind forward 5 turns 2.5mm, then again 5 turns to 5mm and again to 7.5mm forward. Then I would move the carrier forward by 10mm and start the process again. 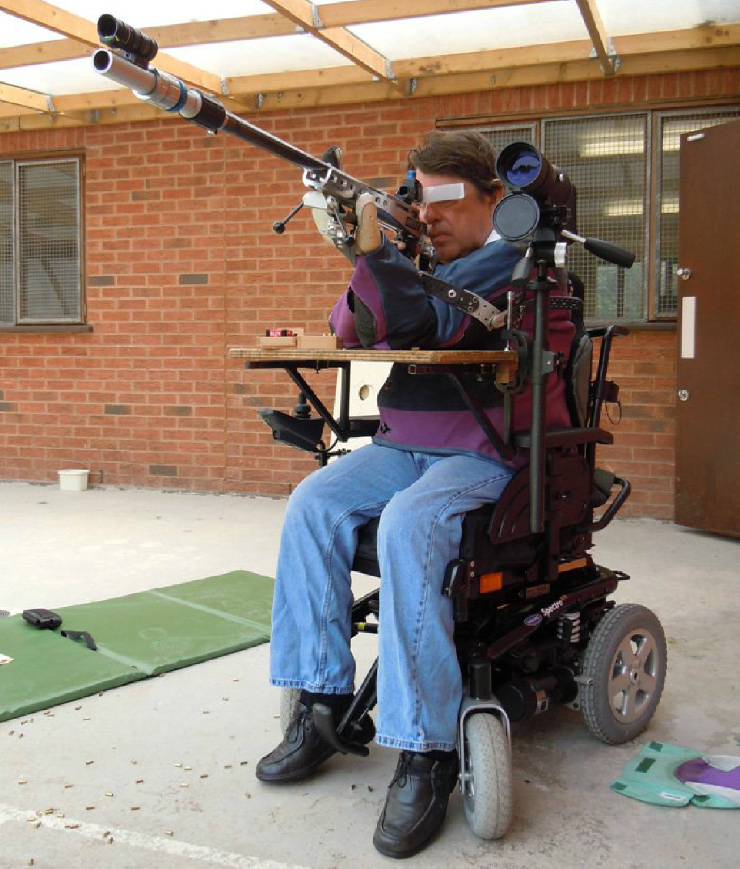 Effectively I would shoot a ten shot group every 2.5mm down the useable length of the tuner, I say useable because the sights have to be accommodated at the front. Now from the information gleaned off the internet and from my own intuition as an engineer I suspected that if I simply plotted the resultant group sizes on a graph and join the dots I would end up with a very spiky line which would be difficult to see the underlying effect of the tuner.

Like all shooters we all mix with people from many professions and walks of life and I have a member of my club who happens to be a Doctor of Mathematics, Dr Stuart Clarke came to my aid and created a means of smoothing the raw graph and adding a second trend line. We fed in gestimated group sizes and I have to say the result looked very good, but what would happen in reality?

It’s well known and understood how a tuner works, normally a bullet with a slightly higher velocity travels flatter whereas a lower velocity bullet drops. A tuner uses the movement of the barrel as the bullet travels down the rifling to flick the slower bullet higher so that it strikes the target in the same place as the faster. That is a rather simplistic explanation and I’m sure there are others that can explain barrel harmonics in greater detail but for us that is all we need to know, we will use hard results to verify. 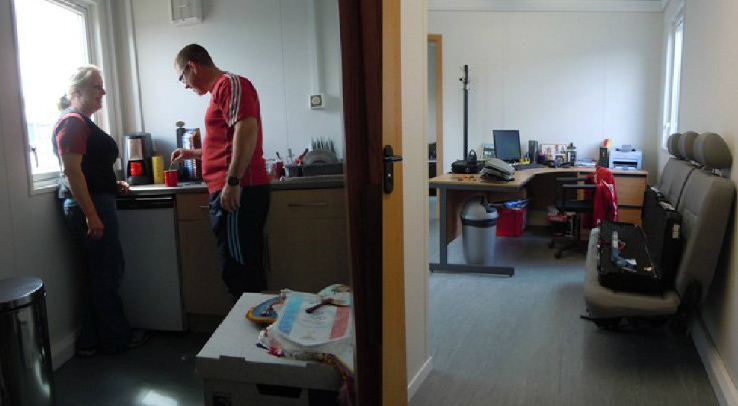 Its 9.00am Tuesday 24th May and I have arrived at Eleys main gate, a less than half hour drive from my home, I have with me Celia Topp retired teacher and regular shooting companion, this is her first visit to Eley and she has come along (she thinks) to take a look at the test facility. The security guard recognises me from the not too distant past and gives a warm greeting to us both we sign in and proceed as instructed to Reception to await Martin who has gone to Birmingham airport to collect an Indian shooter who I later learn has already qualified for the Olympics next year and has flown 10 hours to do a batch test.

Martin arrives after a short wait and we proceed around to the test facility. The last time I was here was December last year to do a batch test I was now absolutely stunned at the change made, a new office had been installed, level access, a wide entrance door, complete with a Kitchen a Dinning area and most importantly for me a fully wheelchair accessible toilet, a fully enclosed ramp now leads down to the test room.

Whilst Martin set up the Indian chap I removed my barrel/action from the stock and fitted the Tuner ready for Martin to fit it to Eleys dummy aluminium Anschutz stock. My action is checked by Martin and head space recorded then its Torque’d down to my preferred pressure. This assembly is then located in a vice and it is torque’d to 50nm.

By bore sighting Martin soon has us set up, it is now that I spring my little surprise on Celia by calling on her to be my assistant, you see I cant reach the tuner to make the necessary adjustments, she happily accepts and we begin the quite laborious process, shooting ten rounds recording the group size then moving the weights forward 5 turns.

Two cups of coffee, two trips to the loo, four hours and 300 rounds later we had the data that we had come for and sit down to a little lunch provided by Eley, thank you. To the untrained eye the list of numbers would mean little but to me I knew then I had more than I ever expected.

After dropping Celia off, walking my dog on arrival home took precedence to entering the data into Dr Clarke’s program, needless to say the dog had to run his normal 1 mile walk. It took some minutes to type in all the data double checking that I had not made an error before finally switching to the graph. The smoothed graph told the story and the trend line backs it up, it depicts exactly what I had visualised in the raw numbers.

What are we seeing; the blue line is our smoothed graph the black line the trend. Starting left with the weights near the barrel the group sizes are large because the tuner is having no effect but as the weights are moved forward the tuning action tightens the groups but then they rise again from mark 8. 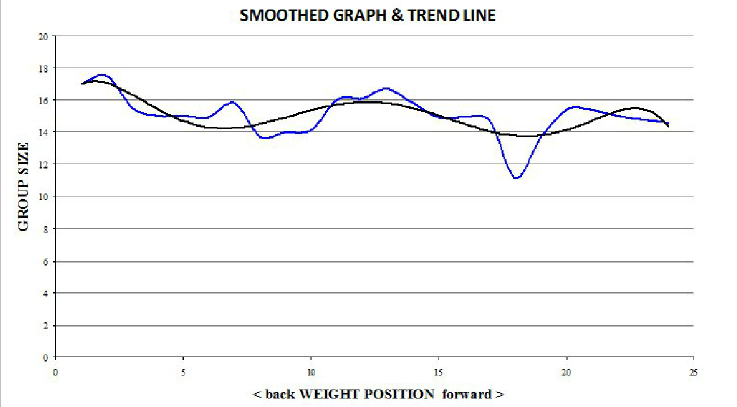 This is the first point of tune and it is now beginning to launch the lower velocity bullets higher, at some point along here would be the point of tune for 100 yards, the greater distance needs the lower velocity bullets to be thrown even higher so that they will share the same impact point at 100 yards with the faster flatter trajectory bullets, for us at 50m its too much.

Then the groups drop as it comes into tune for 50m the impact points converge and bingo we hit the sweet spot. This is giving a group size of 11.1mm on Eleys rig, I say this very deliberately, because the action is so solidly anchored down the only item that can move / flex is the barrel this produces larger groups than when mounted in a stock and held by a fleshy lump, me and you.

The stock and our bodies have a damping effect and group sizes will always be smaller in reality because of that fact. None the less Eleys computer recorded scores no less than 10.5 in our ten shot group. Following this the groups get larger as the barrel goes out of tune for our 50m distance it would probably be here that it would be in tune for 25yards although I have to say that at such a short distance it would be near impossible to see any gain. Having said that I did shoot a 7x poss last week at 25 yards. Beyond this point the tuner loses its ability to throw the slower velocity rounds higher, roughly from the trend line we can see that it starts to ‘tune’ at mark 7 and loses its ability at mark 22.

So conclusions, first go back and look at the group sizes when the weights were close to the barrel, 17mm, these are well above my batch test results and show that the added weight has made things worse which gives credence to some of the chat that indicates that some extension tubes do more harm than good. Does the Tuner do what is stated on the box, yes, and we have the proof, the sweet spot produces groups better than my batch test results. Is it worth having to improve scores, Guy Starik thinks so and he is one of the best in the world you must make your own decision.

Whats next, well we plotted an almost perfect graph and proved that the tuner works but in the tuner world 5 turns for each increment is very crude, I would like to retest using finer increments around the sweet spot my suspicion is we will get even better results.

For, smaller groups, stability on aim, longer sight base, easy to remove and fit, good tube without the weights.

Against, if you do not have a comfortable hand stop the added weight won’t help. You will need to bench rest to find the sweet spot if Centra gave some instructional guidance it would help narrow the field.

My thanks to Celia my able assistant, Dr Stuart Clarke for his wonderful graph, last be not least Martin Buttery and Eley for the welcome given and the use of their new and much improved test facility.

You should also know I’m not in the paid employ of Eley or Centra this was a project that I have undertaken at my own expense.